A Catch-up with Kate & Richard

This week leading up to the 35th anniversary of the opening of the Marble Arch Caves Kate and Richard had a virtual call where they discussed the caves and our 35th birthday. Kate asked Richard what it was like behind the scenes back in 1985 before the caves were open to the public, and whether Richard would be happy to share his story along with some highlights and memories of those early years.

1985 – Opening a Showcave Became a Reality

The opening day was a culmination of quite a number of years of activity, planning and implementation. Although Richard wasn’t there for a lot of the preliminary effort, his recollection is that the idea of opening the cave as a showcave first gained momentum back in 1978. From there, and over the next few years, there was a lot of convincing people that it would be a good idea, keeping in mind this was during the time of the Troubles. So that first push to open the caves to the public as a major tourist attraction was quite a “brave and bold venture” in the middle of a time of unrest in the country. They persevered and led by Gary Burns, the then Chief Executive of Fermanagh District Council, they succeeded and the opening of a showcave started to become a reality.

It’s difficult to imagine how much planning must have went into the opening of the caves to the public. Initially they had to go through all the phases of planning; funding, seeking permissions, talking to local land owners, buying land etc. It was a lot of work. From this they moved on, employing civil engineers to oversee what was then a major piece of civil engineering, the likes of which had never been undertaken in the country before.

When Richard started in January these works hadn’t been fully completed. He was the first and only member of MAC staff. He started to work out what the staffing requirements were likely to be, worked on staff recruitment, began training them up and developing all the new procedures. He even had to think about devising the cave tour itself and what that might look like.

The Important Bits and Bobs

Keeping in mind that nothing like this had been attempted before, they began ordering the specialist gear and equipment they needed. This wasn’t as easy as it first seems, bearing in mind this was pre-internet and they couldn’t just google suppliers. They spent hours and hours looking through catalogues and making countless phone calls just to get everything they needed.

At the same time the bulk of the engineering had been completed in the cave and the electrical fitting had gotten underway. He well remembers various parts of the cave being lit up for the first time. All they had used before were cap-lamps and rings of bulbs set up along the cave walls like fairy lights. It was an exciting time for them all, seeing the secrets of the cave unveiled for the first time.

As the electricians set about equipping the cave with lights they had their fair share of challenges. The water levels in the cave presented was one of the most challenging of all. Initially they found some of the fittings just weren’t standing up to the cave environment as they began to fail. Richard recalled a quite an amusing story of a time one man was working in the far reaches of the cave. He had neglected to bring a backup light with him and the lighting in the cave failed, plunging him into complete darkness. He became stuck in this section of the caves and it wasn’t until a while later that the other staff realised he was missing and went to search for him. To their amusement they eventually found him crawling along the path in the dark on his hands and knees. He must have only reached about 400yards from where he’d started.

Richard also recalled another story. Thinking back to a time he remembers how they had used little rubber boats for moving up and down the river. Much handier than the larger metal ones. He was working with electricians down in the caves and as they set-off up the river one of the electricians got into the rubber boat with a handful of screwdrivers in his back pocket. They must have got no further than 2 yards when they heard a POP!, with them all ending up sinking into the water which was up to around chest-height at the time.

It was all quite intense getting ready for opening, the handrails had yet to be installed as well as developing the content of the cave tour; where people were going to stand, which features to point out to the visitors etc. And then there had to be some thought about who to invite to the grand opening.

This presented a problem. At the time the Visitor Centre was tiny and so it ended up the reception was held at the Lakeland Forum. Once the reception was over, the Marble Arch Caves opened it’s doors to visitors with a bang and within the first couple of weeks the visitor numbers had exceeded the anticipated figures for 6 months. There had been quite a lot of coverage in the press and the BBC had spent some time down in the caves a few weeks before, filming a documentary with a local championship choir who sang songs in the cave. This went out the week the caves opened and generated a tremendous amount of interest. The tours were being sold out as quick as they could run them.

The Visitors in that first year

In the first few weeks most of the visitors were from Northern Ireland and the border counties but soon international visitors began arriving, particularly in the height of summer, from places like Australia, Canada, America and Germany.

To keep up with the demand for tours the caves began pulling staff from other council areas like the Townhall and the Forum just to keep up. It was great to have lots of local employment and the seasonal staff were fantastic. Richard recalled how Fermanagh people are so friendly and they brought with them that sense of comradery which creates a great atmosphere which visitors love. This is one of things Richard looks back on and takes much satisfaction from.

Richard’s Memory of Working in those Early Days

In the early days it was always long hours. From the week before the caves opened he probably went about 6 weeks without a day off, working 12-14hr days, with a lot of that time spent in the caves. Over time he started to come out with tiny spots on his hands and face. So he went to the see his doctor and the doctor asked where he worked. Upon finding out Richard worked down in the caves he straight way knew what the issue was. Too little sunlight, which meant not enough Vitamin D. Off Richard popped with some tablets and was soon back on the mend.

When looking back, most of Richard’s highlights revolve around what were initially problems. For instance in 1992 they noticed the water levels in the cave were not behaving as they normally did, with different amounts of rainfall the cave had been reacting differently than it had done before. Unknown to them there had been a lot of mechanical peat cutting on Cuilcagh Mountain where the three rivers flow to the caves. Eventually they went up there to investigate and found about 40 hectares of bog had been quite heavily cut. That had upset the hydrology of the area and how the water behaves in the soil, with the topography etc. Over the next 6 or 7 years they had a lot of work to do to restore the bog to what it had been before but eventually conditions in the cave returned to normal.

The good thing was that people had become very interested in what they were doing on Cuilcagh. This eventually led to the development of Cuilcagh Mountain Park alongside the Marble Arch Caves and the two worked quite well in tandem.  Later, in 2000, Richard received a phone call from a friend who worked for the Geological Survey in Dublin. His friend asked him, “Have you heard about this new thing, Geoparks?” This conversation set off a chain of events and application was soon submitted, was accepted, and the Marble Arch Caves became the first European Geopark. Since then, the Geopark has grown into a huge national network with UNESCO sites across the world joining the Global Geopark community.

This was one of Richards fondest achievements, which brings him great pride and pleasure. He’s still involved in volunteering and work with Geopark community and likes to keep his hand in it. He recalls looking back, “If it had not been for those turf cutters, we wouldn’t have stepped onto Cuilcagh Mountain. So sometimes problems turn into great opportunities.” Isn’t this such a fitting and important message in today’s current climate.

Over the years the Marble Arch Caves has continued to develop and has now become a household name across Ireland and much further afield. He doesn’t think too many visitors of the Marble Arch Caves go away disappointed and believes to this day that a trip to the caves is a fabulous experience and one not to be missed.

His hope for the future is that this moment of crisis with COVID-19 will become a thing of the past before long, and we’ll all be better and nicer people because of it. 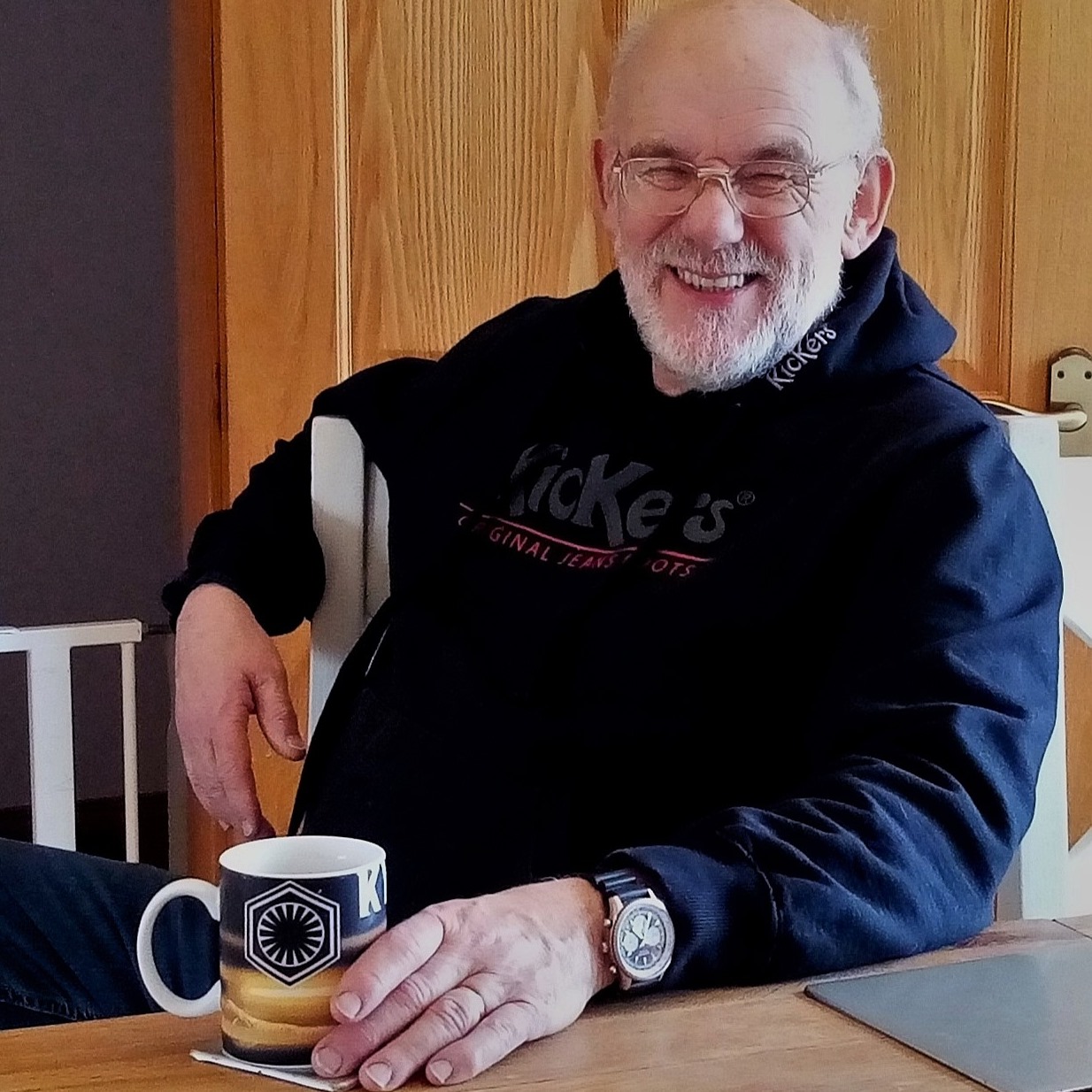